Analyses for PBL, CPB, SCP, ZonMw and the Health Council

Contextual Response Analyses (CRA s) are extensive assessment reports on audiences and stakeholders. Many of these have been commissioned by public research institutes, such as Health Council of the Netherlands, ZonMw (The Netherlands Organisation for Health Research and Development), The Netherlands Institute for Social Research SCP, CPB Netherlands Bureau for Economic Policy Analysis and PBL, Netherlands Environmental Assessment Agency.

The analysis of the response is about “how many or much” response can be found, but involves specifically the response in various domains, and aims to answer questions of “how” and “by whom”:

The formal task of public research institutes is to inform government and politics, but very often their reports draw considerable attention in public opinion and among professionals. Searching for societal response I may find hundreds of societal users or stakeholders, in commercial, (semi-)public and personal domains in very diverse sectors. Each of these research institutes appear to have gathered a specific audience, often to the surprise of the institutes much larger than previously experienced.

Examples of numbers of users in specific sectors (figure). 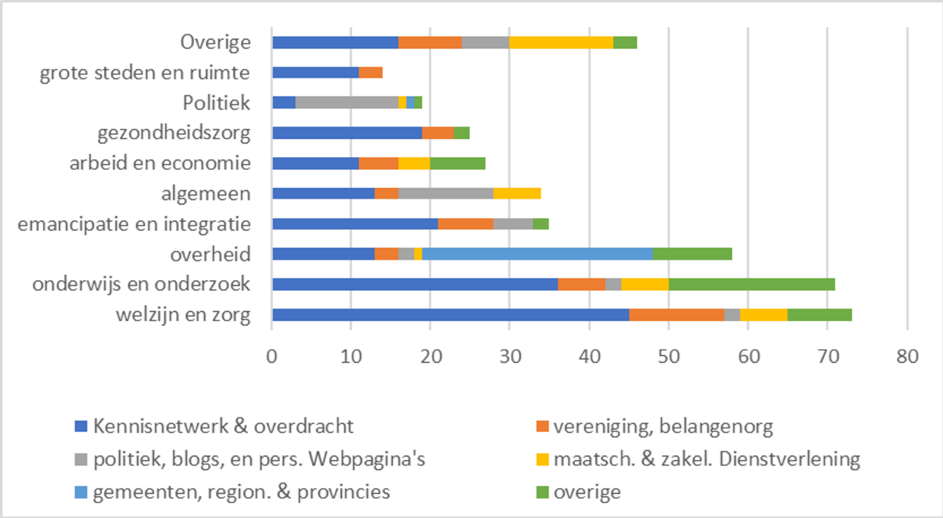 You can read about Contextual Response Analysis in my publications. The approach will be developed further in the collaboration with CWTS on Evaluative Inquiries.

Which contribution is of importance, and what is its effect? How to assess scholarly research?

‘The formal task of public research institutes is to inform government and politics, but very often their reports draw considerable attention in public opinion and among professionals’